For those geographically challenged individuals who may not catch the unexpected twist in my nostalgic ramblings: Munich is a landlocked city located in southern Germany, not exactly a logical environment for the wave riding sport invented by ancient Hawaiians. Nevertheless, He’e nalu (wave sliding) or surfing, on Munich’s urban waterways has taken the Bavarian capital by storm. During the warm summer months up to fifty surfers at a time - barefoot and decked out in pro gear, wait patiently at the edge of the city’s bustling English Gardens for their turn to ride the wave. Just a few feet from the Haust Der Kunst art museum, tourists crowd excitedly around the mouth of the stream, where a surge of ice-cold water explodes from underground, creating an impressive standing wave. Veteran surfers glide adeptly from side to side, cutting in dangerously close to the concrete edge, ditching their boards’ at the last minute possible to narrowly escape an unpleasant head on collision with the shallow rocky river bed. This is the Eisbach, the ice stream.

Sound dangerous? It is. Until 2010, surfing the ice stream was technically illegal, although this didn’t stop hard-core surfers from riding the wave even into the cold, dark winter months. As Jon Ruppersberger a local surf shop employee explains: “you would quite often see surfers running through the Englischer Garten being chased by policemen...[They] regularly had to pick up their boards from the police station.” * In fact, the taboo nature of surfing the Eisbach probably only nurtured the tight knit, tribal mindset which developed around the urban sport. Before Eisbaching became legal, surfers stuck together in order to manage the threat of both perilous conditions and legal repercussions. Carston Curmis, a Munich local, described one such strategy: “we'd have to keep one eye on the wave and one eye on the street in case an officer came." **

As news of the Eisbach wave spread on the internet, Munich river surfing gained momentum, attracting an increasing number of landlocked surfers. By 2006, Munich had earned a reputation as the worlds' largest urban surf spot garnering the attention of big name brands like Quicksilver, who even hosted a 2006 River Pro Surf contest. In 2009, Bjoern Richie Lob, a veteran Eisbacher himself, directed the documentary film Keep Surfing, which follows the development of the sport and the* Eisbacher*'s lifestyle. The Eisbacher's were no longer an underground community, they were out in the open, quickly becoming the city's favorite quirky pastime.  Munich locals lobbied to formally allow the Eisbacher's to practice their craft in the icy waterways of the city gardens, which led the municipal government to officially legalize river surfing for “experienced” surfers in the Eisbach in 2010. 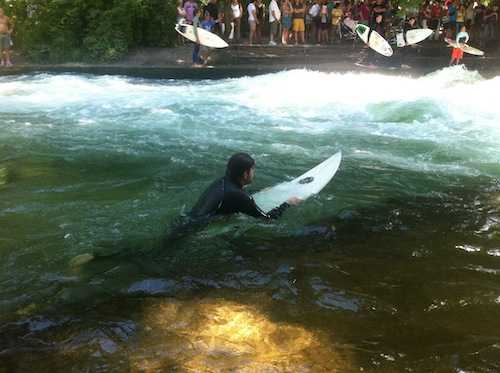 Today, walking through the mossy path of the Englischer gardens looks more like a surf camp then a landscaped public park. On the grass surfers and their friends hang out in the sun, barbequing, drying their wetsuits in the trees, their freshly waxed boards at their feet. Three surfers walk towards me in wetsuits. Barefoot, carrying their boards at their sides, flaunting their golden sun-kissed tans, unkempt blond “beach hair” and abs to rival even Kelly Slater's washboard stomach. I feel slightly disoriented. A walk in the park illustrates the changing scene of Munich’s urban lifestyle. Even though Eisbaching no longer holds the same penal risks, one fatal step and the Eisbach could be closed for good. To ensure the survival of the sport, and its practitioners, veteran _Eisbachers_ regulate who surfs the wave, keeping beginners out of the water in order to minimize the risks involved. I wonder, how will this attitude impact the face of the city as Eisbaching becomes increasingly institutionalized, and how will this new relationship of rivers and surfing affect the culture of surf in general?