Less than two miles off the coast of Dakar surrounded by clear turquoise waters and white sand beaches lies the tiny island of Gorée. Accessible only by boat, Gorée is a top tourist destination for international travelers and Senegalese alike. The island offers a quiet haven from the bustling lifestyle of the Capital: smiling children run freely in and out of brightly painted colonial style houses, artists relax and contemplate under the shade of massive palm trees and motorized vehicles are not allowed on its bucolic cobblestone streets. From the upper deck of the government operated Ferry there is little evidence that life on this undisturbed island was ever anything but peaceful and charming. Yet, behind the friendly faces and colorful architecture, Gorée is home to a much darker past.

A house of slaves

Gorée, a UNESCO world heritage site since 1984 has become a mecca for those seeking to understand one of the most tragic stories in modern history: the African slave trade. The Encyclopedia of World Slavery states that twenty million Africans were sold and shipped to the Americas from the very port, which today serves as an embarcadero for hundreds of thousands of tourists annually. They come from around the globe to pay respect to ancestors who died in captivity. Others seek to make amends for the unspeakable acts of great-great-great grandfathers, which have shaped the course of history. The most well known stop on this memorial tour is the House of Slaves, described by UNESCO as “built in 1776 by the Dutch, [it is] the last surviving slave house in Gorée; the earliest date back to 1536 and were built by Portuguese, the first Europeans to set foot on the Island in 1444”. Here, visitors can see for themselves where the slaves lived, where they went to the bathroom and the final holding cell where the slaves waited chained and afraid to be taken to another world. There is no doubt that a visit to “La maison des esclaves”, as it is called in French, is a chilling reminder of what happens when humans loose their humanity. However, the historical accuracy of the site has recently been contested.

In a controversial article published last week in the French edition of the Huffington Post, Historian Jean Luc Angrand makes shocking revelations about the truth behind the “Maison des esclaves” on Gorée Island. Angrand claims that Pierre André Cariou, a medical doctor in the French Navy stationed in Dakar during the 1950s, invented the story of Gorée Island and the Maison. Angrand is quick to point out that Cariou most likely did not deliberately fabricate lies in his historical novel “Promenade à Gorée”; rather he documented hearsay and his own guesses as to the history of the Island which he shared with friends. When Cariou passed away, a Senegalese man (Joseph N’Diaye) who had helped the doctor show visitors around Gorée as a young boy took over this task. N’Diaye, continued to recount the stories of Gorée island to entertain tourists and soon, he became a legitimate figure in the Senegalese historical scene.

By the 1980s Gorée had gained international recognition, becoming an important symbol of the African Slave trade. The Island brought big money to the Senegalese government, tour operators, local businesses, and even the Université of Dakar who benefited from a monopoly of historical and cultural expertise of Gorée.  Professors were given visiting positions at prestigious American universities, invited to international conferences and received funding for research.  Nobody seemed to question the facts surrounding the history of Gorée Island. 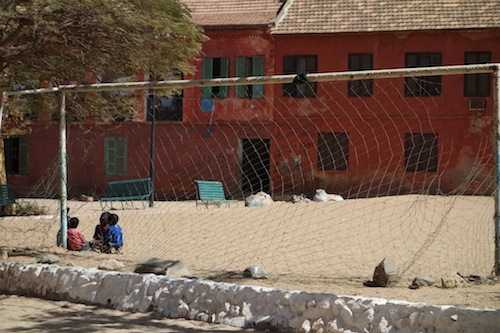 That is, until Dr. Phillip Curtin a professor of African History at John Hopkins University blew the whole story of Gorée Island out of the water. For the first time, Curtin questioned the validity of the statistics that 20 million slaves left from Gorée – reminding his readers that only 15,000 slaves were ever shipped from Senegal (accounting for only 5% of the slave trade). His work was shuffled away into academic obscurity by what Angrand is claiming to be a sort of Gorée mafia, a vast network of international and local government officials, businessman and tour operators who make up the Gorée Business. Angrand published his study in 2006 arguing that the two supposed “Maison des esclaves” on the island were in fact both destroyed and never restored.

The “Maison des esclaves” which receives hundreds of thousands of visitors annually, was a private home belonging to a women by the name of Anna Colas Pépin, a creole, who, get this, was an active member of the anti-slavery movement. Angrand goes on to show that most slaves actually sailed to the New World from the northern colonial capital of Saint Louis or the British colony of the Gambia, not Gorée. In academic circles, Angrand and Curtin’s research is now widely accepted as the historically accurate version of life on Gorée Island. Yet, even on my last visit to Gorée less than a month ago, we were still being told that we were visiting the cells where slaves awaited their destiny, chained and desperate. While in actuality, these “cells” could have very well been where Mme Pepin invited her friends to tea.

The case of Gorée Island raises an interesting point: what role do historical facts play in our collective memory? Who we are today as a society is shaped just as much by our imagination of where we come from as the historical events which led us here. Memory of our past is actually an agglomeration of myriad visions, emotions and experiences. How this is recounted and who tells the story can change the course of history.  We as historical consumers contribute to collective memory every time we visit a site like Gorée, each time we retell the story, blindly absorbing fiction as facts and accepting facts as history. History is about finding a healthy balance between reality and imagination, both essential elements of our past. Places like Gorée, which have taken root in our souls, represent shared experiences of the past and give feeling to historical events which we could not access in a history book. In this sense, whether or not 15, 5,000 or 20 million slaves were shipped from this island is less important than the symbolic power it has come to have in our memory of the slave trade. Facts, on the other hand, do matter, and the deliberate manipulation of history is a dangerous business. In cases like Gorée, we as consumers are accountable for making sure that the business of memory making does not usurp the memories themselves.